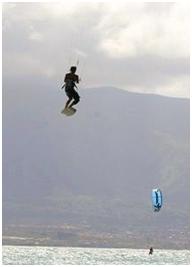 Wait, don’t leave just yet! And don’t go dust off the old physics textbooks either. I did spend some time kite-boarding this weekend, and a refresher on aerodynamics wouldn’t have hurt, but I have a different kind of flow in mind right now: on Sunday morning, venture capitalist Fred Wilson posted his thoughts on the raging discussion around data portability. His insight? Data flow, rather than data itself, is the truly valuable currency on social networks, the one that competitors like Facebook and Google’s Friend Connect are mercilessly fighting over. He goes on to demonstrate how his kids literally depend on the many event streams going through Facebook to keep their social life in check.

Somehow this prompted me to reflect on what I perceive as a growing acceleration and fragmentation, dare I say balkanization, of influence in social media.

Here’s the thing: blogs, some ten years ago, gave an accessible conversation dissemination platform to anyone with a voice, thus creating the opportunity for more informal circles of trust and influence to evolve, beyond mainstream media, around specific topics. That was then. What we’re witnessing in 2008 is the rise of a new crop of services, from now old school Twitter to aggregators like FriendFeed, that help further tear down the barriers to entry for contribution, and push ever further the micro-chunking phenomenon.

What does that mean in terms of influence? The fragmentation bit is obvious: increasingly, memes propagate across the social mesh rather than simply across mainstream or even topic-centric publications. When republishing and aggregating services appear, they allow for the explicit consumption of vetted information and content along friend graphs. Acceleration follows: the ability to send link love rippling around those same graphs is only a click away. There are other meaningful consequences when it comes to influence. In particular, as meme velocity increases, so is meme mutation rate: ideas flowing through the social ecosystem are appropriated, augmented, altered with each reformulation – depending on where you stand, this is the true beauty of the medium, or instead the kink in an imperfect replication scheme.

For anyone in the business of surfacing influence, this translates into a clear opportunity: the ability to sense and react on the spot to emerging trends in the medium, and capture meme momentum across a broadened range of vectors, leads to unprecedented targeting options. In particular, I tend to be more optimistic on this than Matt Maroon: in a recent post on the shortcomings of ad plays on social networks, he contends that Facebook will always lag Google in terms of engagement. I agree, but only to a point: I see massive room for improvement past the current ads we see there, untargeted for the most part beyond primitive demographics. While the notion of engagement on social sites is more akin to flash mobs forming and dissipating rapidly, than to continued focus on a stable topic, engagement does happen. For instance, around events organized and propagated through the mesh. Such events exhibit many of the traits of influence I just discussed, from velocity to topic-centricity to friend-based vetting. If we’re quick enough to catch it, there’s definite engagement happening at those edges.

Cross-posted on the Buzz blog.